A really nice early spring day with clement conditions and a hatful of movement afoot; in some ways it was also an odd day, with rich rewards numbers-wise in certain favoured spots whilst other areas were relatively quiet. Wheatear and Chiffchaff were very well represented, with some hundreds of both scattered about the island and clearly very actively on the move; Willow Warbler and Blackcap were both also numerous, with several Black Redstarts, 2 Redstarts and a Ring Ouzel amongst the quality unearthed on the ground. It was equally busy overhead, with a 35 minute sample count from West Cliffs during the afternoon of 87 Sand Martins, 51 Swallows and 44 Meadow Pipits being entirely representative of a strong passage that developed as the day went on; singles of Little Ringed Plover and Whimbrel over Chesil provided some quality overhead. Movement was a wee bit fitful on the sea but included 12 Red-throated Divers and an Arctic Skua through off the Bill and 2 Garganey and a Little Gull lingering off Chesil.

Chiffchaffs are still very much to the fore in the phyllosc stakes: the morning ringing session at the Obs saw them ahead of Willow Warbler by a 5:1 ratio © Nick Stantiford: 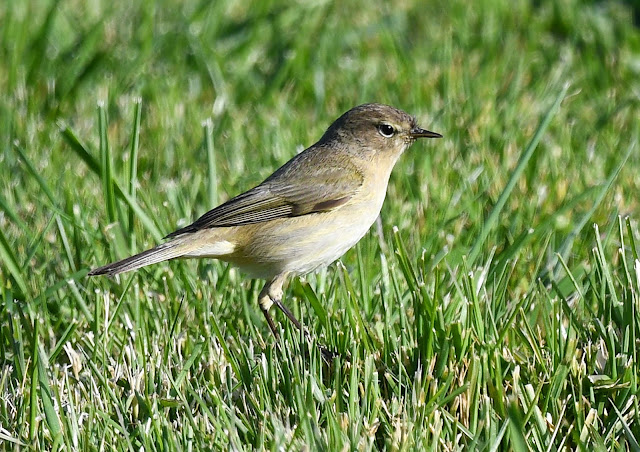 On a day when we were rather dispirited but hardly surprised to observe from our Twitter feed that an awful lot of folk's idea of having an interest in natural history involves hundreds of miles of criss-crossing southwest Britain between a Mockingbird, an American Herring Gull and a Walrus - all of which had been perfectly well documented by umpteen people before them - we were massively impressed (...and wholly gripped off since it involved an area that, more than half a lifetime ago, we used to watch on an almost daily basis) when we received word that Dave Chown had found a Desert Wheatear in an obscure backwater of Lodmoor. Apart from the fact that we nipped over to see it, you might wonder what connection this has with Portland but it wasn't lost on us that getting on for 30 years ago Dave's mindset was probably much the same as it was today when he headed over to Portland on a hunch that the weather conditions looked interesting and proceeded to stumble across Dorset's first Desert Wheatear at the Bill - a hit-rate of finding 50% of the county's Desert Wheatears, how good is that?! © Martin Cade: