Freaky weather always opens up the possibilities for freaky bird arrivals and Pallid Swift had been spoken of more than once during the ongoing extreme mildness; when visitors dropped in at the Obs with news of a 'noticeably brown' swift passing by along the Grove cliffs it seemed like the predictions had come to fruition; however, subsequent searches for it drew a blank so it'll likely prove to be one of those that got away. With the mildness accompanied by plenty of wind the sea got a lot of attention, with 4 Great Skuas, 2 Gadwall and a Little Gull the pick of the returns from Chesil Cove and singles of Balearic Shearwater and Pomarine Skua the best off the Bill; also of note was a late Common Tern that dropped in at Ferrybridge. The land had its moments, albeit not many of them: the Black Brant paid another visit to Ferrybridge, the late Hobby lingered on at Verne Common and 50 Siskins and singles of Merlin, Black Redstart and Firecrest were logged at the Bill.
The Hobby would have given some great views at Verne Common but was always a long way off from our viewpoint at Fancy's Farm © Martin Cade: 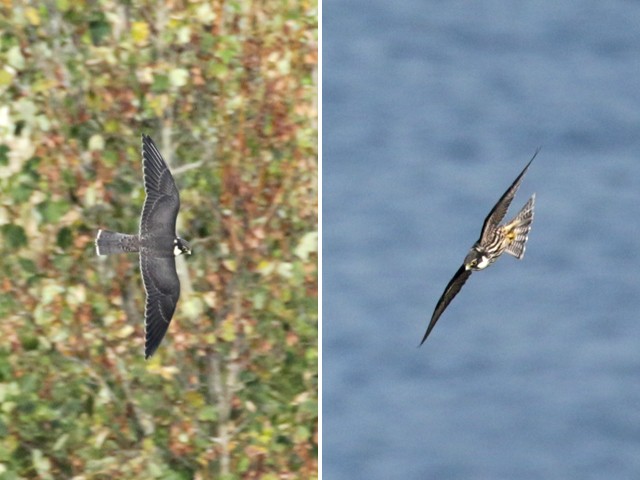 Spending some time on the viewpoint at Fancy's Farm reminded us yet again of how fantastic the habitat looks on this part of the undercliff and how absurd it is that there's no public access to this whole area: it all falls within the estate of Portland Port who evidently deem that providing public access would be some sort of security risk - we're not quite sure to whom, but what's abundantly clear is that providing access would open up for scrutiny the extent to which the insidious creep of industrial development is eking into the greenery that overran this area once its previous custodians - the Royal Navy - departed in 1999 © Martin Cade: 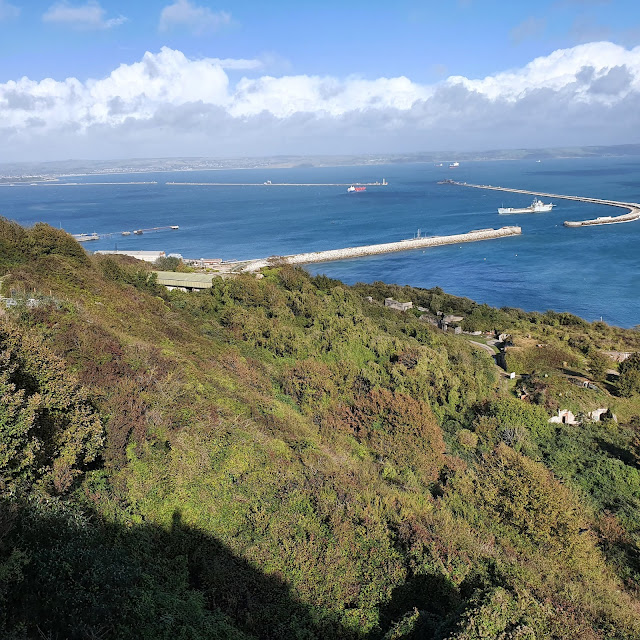 Heavy rain and cloud cleared by1100hrs and ringing with restricted netting at Portland Bird Observatory produced 8 birds before closure and a new heavy storm from 1800hrs. Only 2nd Firecrest ringed this autumn with 3 Siskin,Blcap and 1 new juv. male Sparrowhawk. pic.twitter.com/m41JmJc3zQ

Today started badly, my favourite cap blew off my head into Radipole 😫, I stopped off at Ferrybridge on my way back from the tip, I was hoping to get some pics of Brents, but someone let Fido scare them off, so I sat down and right in front of me this beauty, a 1st ever Arctic pic.twitter.com/LGLyXG4buW

Not the best - but definitely has to be one of my best inflight shots of a beautiful Shortie yet 😅🌿🦉
Sat 16/10/21 #asioflammeus #owl #NaturePhotography#naturelover #beauty #WildlifeWednesday #bbcWildlifePOTD pic.twitter.com/XH52tHUcZw